Bioremediation is the process by which contaminants in soil and/or groundwater are treated biologically, primarily by microorganisms or biomolecules generated by the cells. Bioremediation processes can take place under oxic (with oxygen) or anoxic (without oxygen) conditions. This article focuses on enhanced in situ bioremediation (EISB) for the anaerobic biodegradation of organic contaminants, particularly chlorinated solvents, in soil and groundwater. However, much of the information provided is applicable to other contaminant types. EISB is frequently selected as a remedial technology as it can provide complete degradation of contaminants utilizing natural microbial processes, is able to be implemented in a variety of site conditions, and is relatively low cost compared to more active engineered remedial systems.

Laboratory and field applications over the past two decades have shown that microorganisms in subsurface environments can degrade a wide variety of chemicals to environmentally acceptable end products. Anaerobic bioremediation of contaminated groundwater and geologic materials typically involves in-situ treatment via biostimulation using various carbon-based amendments, because most sites lack sufficient organic carbon to promote anaerobic microbial respiration. In some cases, bioaugmentation, the injection of a microbial culture, may be required to provide the appropriate microbial community to promote complete degradation of the target contaminants. Anaerobic bioremediation remedies typically involve an initial amendment application, followed by a period of monitoring to demonstrate the remedial goals have been achieved and to evaluate the need for additional amendment applications.

In contrast, cometabolism occurs when microorganisms do not utilize the organic contaminant as an energy source, but the contaminant is fortuitously degraded by enzymes or co-factors produced during the metabolism of another compound.

Many contaminants can be degraded by bioremediation in both laboratory and field settings including the use of biological treatment processes for common organic contaminants as well as metals, metalloids, and perchlorate (Tables 1, 2).

Bioremediation is widely applied for remediation of recalcitrant compounds present in soil and/or groundwater, and is often chosen as it can be a less expensive, adaptable to site-specific conditions, and more sustainable choice to achieve remedial goals[32]. Multiple guidance documents are available that describe design and implementation considerations, and results from applications around the globe. This includes guidance from the United States Environmental Protection Agency (USEPA)[1], the United States Air Force, Navy and Environmental Security Technology Certification Program (ESTCP)[33][2], and the Interstate Technology and Regulatory Council (ITRC)[34].

The selection and design of an anaerobic bioremediation remedy should include the following factors[1][32][34][35]: 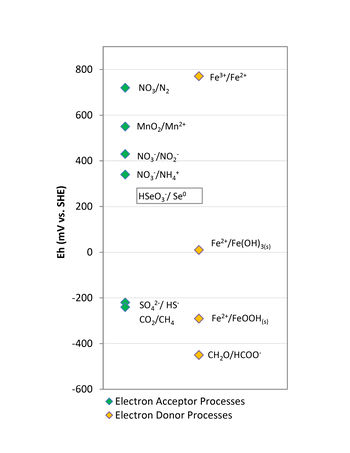 Biostimulation means adding compounds to the subsurface to encourage indigenous microorganisms to metabolize target contaminants[1]. In anaerobic reductive processes, simple organic carbon compounds (e.g., sugars, alcohols, aliphatic hydrocarbons, and volatile fatty acids) serve as electron donors to stimulate anaerobic bacterial growth, and thus enhance the rate and extent of biodegradation of the target contaminants. For anaerobic oxidative processes, it may be necessary to add electron acceptors, such as nitrate or sulfate to enhance biodegradation. A crucial component of the design of anaerobic bioremediation systems is selection of appropriate amendments, and their application dosages.

In the case of electron donors, the amendments used in bioremediation applications are typically classified as quick release compounds (lactate, sodium benzoate, molasses, whey) or slow release compounds (emulsified vegetable oils, HRC®, EHC®, ABC®+, mulch, compost). These electron donors are added in anaerobic bioremediation to stimulate conditions conducive to the degradation processes by depleting the dissolved oxygen (DO), and other terminal electron acceptors, and lowering the oxidation-reduction potential of groundwater. In addition, products of electron donor fermentation (i.e., simple organic acids, hydrogen) are required as an energy source for metabolism of decontaminating microbes. The amount of energy released during electron transfer from the donor is controlled by the redox potential (Eh) of the terminal electron acceptor. Therefore, anaerobic microorganisms typically use available native electron acceptors in the following order of preference: nitrate, manganese and ferric iron oxyhydroxides, sulfate, and finally carbon dioxide (Fig. 1). 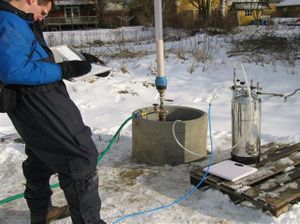 Figure 2. Example of bioaugmentation at a field site.

Bioaugmentation may be considered at a site when an appropriate population of anaerobic microorganisms is not present or sufficiently active to stimulate complete anaerobic degradation of the existing contaminants. While microorganisms necessary for complete biodegradation of some contaminants (i.e., perchlorate) can be fairly widespread, this is not always the case. In these cases, bioaugmentation is used to enhance bioremediation. Bioaugmentation involves the injection of microbial cultures comprised of non-native organisms known to degrade the targeted contaminants to completion (Fig. 2). For example, the presence of Dehalococcoides-related microorganisms has been linked to complete dechlorination of PCE and TCE to ethene in the field[43][44][45][46]. Commercially available bioaugmentation products that contain these microorganisms include KB-1®, SDC-9™, and Bio-Dechlor Inoculum® Plus.

There have been numerous field demonstrations of anaerobic bioremediation documented in publicly available literature and reports, including: